Too many brands still think being ‘social’ is about putting a campaign on Facebook but it is much more than that. VisitScotland’s social media manager, Simone Kurtzke, talks to Pamela Whitby about how this tourism organisation is tackling the challenges

VisitScotland’s aim is to ensure the entire business becomes more ‘natively’ social. “This requires quite a different way of thinking,” says Simone Kurtzke, the tourist body’s only social media manager, who has implemented an integrated model to help her manage the task of putting social media at the centre of the business. This involves training staff members from across different departments on social media so that it corresponds to their own business objectives, she explains.

As an example, the PR team is trained on how to effectively use Twitter to achieve their PR objectives, while marketing teams,work closely with Kurtzke to integrate social channels in the overall communication strategy.  At the same time, lunchtime learning sessions are open to all staff so they can learn about social media basics. Of course central to this is training and support as well as involving staff and making it their responsibility. “I always end up my sessions with a slide on next steps and it just says ‘YOU’,” she stresses.

Earlier this year the agency ran its first ever ‘native’ social media campaign. The brief was to create a socially charged consumer campaign that engaged creatively while raising awareness of the ‘Year of Creative Scotland’ - a Scottish Government initiative. “The big idea was that everyone loves Scotland’s inspirational landscapes and nature, its quirks, festivals and its people,” says Kurtzke. And the growth in easy digital photography in this social and digitally connected world made that fairly easy to achieve. “There is a wealth of beautiful photos of Scotland out there!” 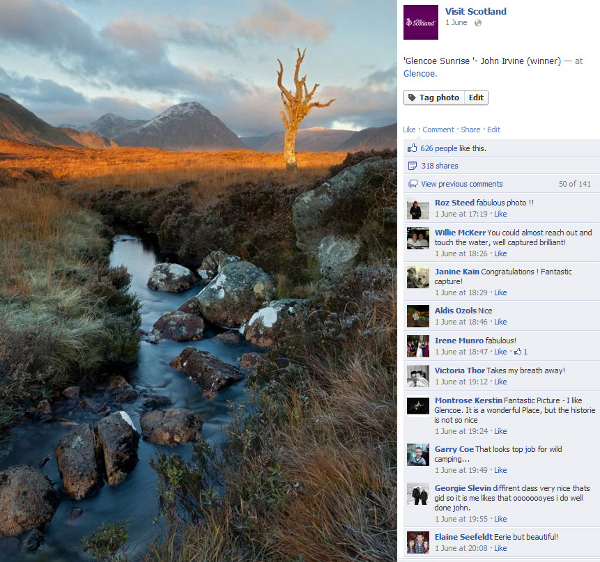 VisitScotland used social media as the main engagement driver, reusing user-generated photos – an increasingly popular social theme - throughout the campaign period on social media channels. Facebook was the main channel used to reactivate engagement with the campaign and the ‘Year of Creative’ message. “User photos and their stories were at the heart of campaign,” explains Kurtzke. For example, credited photos on Facebook, Pinterest, and Twitter were used throughout campaign period, giving exposure to amateur photographers and artists. Photographers were also invited to engage with discussions about their photo on VisitScotland’s Facebook page.

“The results smashed all expectations,” says Kurtzke, explaining that the “we ended up 1,200% above target - and even gained our very first CIPR Pride award nomination, for Best Use of Social Media, in the process. And all this happened in our first year!”

For Kurtzke, one of the most important things is that any social activity has clear deliverables for return on investment. “Why would anyone do any social activity without (a) objectives (b) KPIs and (c) evaluation or ROI?” she asks. “It’s strange that in the ‘social media world’ people seem to be able to think ROI isn’t needed. “

So what are the biggest challenges? The biggest issue right now is time and resource, something that affects most other brands out there. Scotland seems to inspire fierce advocacy and passion so getting people to engage is not really an issue. In fact VisitScotland has a really good crowd of Twitter followers, and Facebook fans who regularly post stunning photos, but Kurtzke admits it is not always possible to properly nurture those relationships by giving people the attention they deserve. 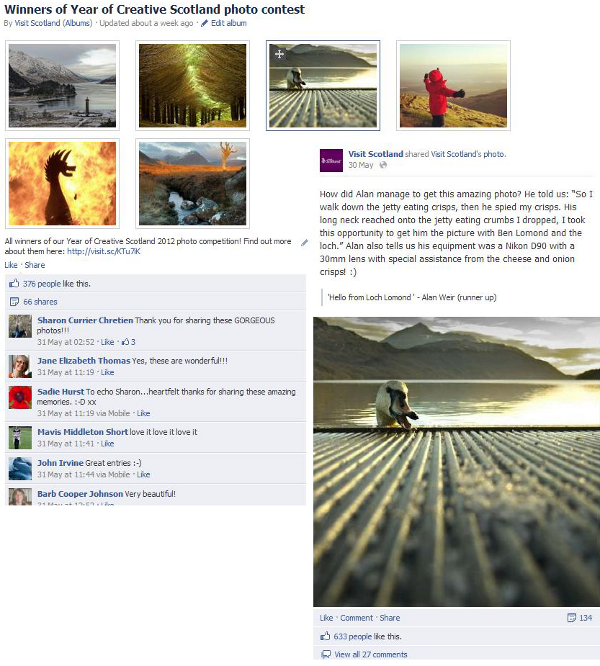 Challenges aside, Kurtze runs a tight ship. Here are her Five Top Tips for managing a social media campaign internally.

1.   Create a social media policy - this was the first thing I did when taking up the job. Work with your HR team to ensure that all employees are aware and agree with the policy - similar to an IT policy, a social media policy is an absolute must-have these days. There are tools such as the Policy tool if you don’t know how to start (http://socialmedia.policytool.net/) - however I would strongly recommend to only use this as a pointer. Your Policy must be right for your business and can’t be generic.

2.   Make it everyone’s job - don’t let stakeholders regard you as the person that will execute all their social activity. This will only hinder the fundamental changes required to make a business ‘social media fit’.

3.   Investigate tools - there are some awesome tools that help with collaboration. For instance, GroupTweet will allow stakeholders from different business areas to tweet from the same account and it’s also got a neat premoderation option so that the Social Media Manager can retain editorial control - after all, it’s still your job to be the guardian of your businesses’ social media efforts. Conversocial is another one we use and it makes our Facebook activity so much more effective and efficient.

4.   Put training into practice quickly. Don’t just keep it theoretical and don’t get in external companies who may not understand your specific business needs.  Since a change in thinking is required to make social successful, always use practical exercises and then encourage stakeholders to use the new knowledge immediately, i.e. with current activity

5.   Be patient. It takes time, and not everyone is equally eager, ready, or able. This is normal and, while it can be frustrating, it’s so much more satisfactory when you see the results. Both in real-time from your social communities, but also, nothing puts a smile on my face like seeing a senior stakeholder suddenly pop up on my Twitter feed!