‘Normal’ is not enough: delighting with design can make all the difference

IN-DEPTH: It is challenging being an independent hotel but there is the possibility to experiment with everything from optimising direct bookings via your website to investing in beds and innovating with hi-tech curtains. Pamela Whitby takes a look

In today’s competitive and consumer-led world of travel, what lengths do designer boutique hotels have to go to, to captivate, inspire and ultimately entice customers through the door?

Hiring a world-renowned clothing designer like Oliver Lapidus to create a sophisticated, sleek and entirely new interior is one way of creating a compelling story around a brand. And this is exactly what Phillipe Vaurs, chief executive of Elegencia hotels, has done with Hôtel Félicien, his newest designer boutique hotel, which will open in Paris this month within walking distance from the Eiffel Tower.

Lapidus, the son of Ted Lapidus whose accolades include developing the unisex look and designing the jacket worn by John Lennon on the Abbey Road album cover, was one of the first designers to use optical fibres in clothing in the late 1990s. “It was maybe a bit advanced back then but maybe my clothing was a laboratory for this move from couture into interiors and furniture,” he says. Twelve years on and the curtains at Hôtel Félicien have been crafted using these transparent fibres in a space where couture meets design, where craftsmanship meets computer technology.

Mood of the moment

As with the fashion industry, today great hoteliers have to understand the mood of the moment and then create and ambience both in the real world and online, and then somehow sell this to their customers. So why does great design matter? 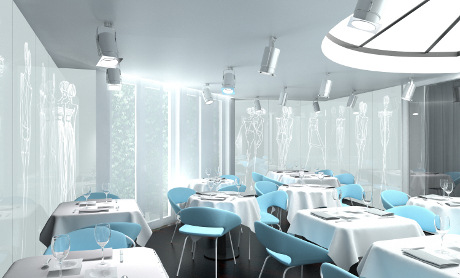 Says Lapidus: “Design is the first contact customers or travellers have with an hotel; it's like the food - before you taste you have to look.”

Efficiency is, of course, important but aside from how you approach marketing, “design is the only way to build an image, an immaterial value which makes all the difference,” he says. It's all about creating a feeling of quality and value; the coherence between price and service.

It took over two years to establish an entire concept for the hotel, to make it efficient in terms of quality and function but also ergonomic, says Lapidus. Throughout the process his first concern was the future customer experience.  In each room every single detail was considered from lighting to material quality and exclusive paintings were commissioned for each room.

Hotel Felicien may be attempting something extraordinary with design, but not everybody has the budget. Still differentiating to stand out is something all independents must do (see EyeforTravel Oct 19, 2012 Time to shape up: why independents need to raise their game) to get customers through the door. Nah-Dja Tien known as ‘The Boss’ at the budget-boutique Fusion Hotels in Prague says this means really thinking differently about everything from hiring staff to marketing, sales, interior design and contact with both guests and local suppliers.

There are enough ‘normal’ hotels in the world, he says, that all do the same kind of check in, check out, breakfast and so on. “If you change any of these procedures, you already have a different approach. You will be noticed and have a chance to stick your neck out.”

Most guests visiting a city like Prague will be using their hotel to sleep. Tien says: “We invested a lot in Hästens beds from Sweden, to give the guests the best possible sleeping experience”. Aside from that a great breakfast (preferably available 24 hours per day), cleanliness and friendly staff who are willing to “think outside the box” are, for Tien, the basis of a good hotel.  Interestingly, most of his staff had never worked in a hotel before and for this reason there is, he believes, a very different first impression at reception. As a result of efforts to be ‘different’ Fusion Hotels is ranked in the top 10 trendiest hotels in Europe on Trip Advisor. “This brings traffic and free publicity, combined with good service in the hotel and it generates revenue,” he says.

Social media is something that Felicien and Fusion take seriously too. Since launching its Facebook page in September Felicien already has nearly 7,000 likes.

At Fusion Tien responds personally to reviews on TripAdvisor and employees are given iPads and encouraged to post on Facebook as much as possible. Both Felicien and Fusion are working with World International Hotel Promotion. WIHP is one of many website development agencies which can help firms drive traffic to their own websites to generate direct bookings thus increasing revenues. “Having somebody develop a site, do the marketing for the site, including the search engine optimisation has increased the traffic to the website and resulted in us doing more business in both volume and revenue than any other online travel agent currently on the market,” says Tien.

But the Fusion ‘concept’ is also a big part of the success story. “To market something different and cool is easier than marketing something standard and boring,” he says, adding that being independent is actually a blessing. “We are able to choose our own strategy and decide who to partner with. Innovation is not easy in a group environment.”

Lapidus sums up it: “When you taste independence you like it, it allows you to be free and develop human relationships with your customer.”

He is talking of course about his experience as an individual but the same applies to hotels. As somebody who comes from a family of fashion icons who have resisted being absorbed by a big name, he should know.