Google takes the biggest share of the hotel metasearch pie

A new white paper from EyeforTravel, the first in a three-part series, finds that 73% of travellers regularly compare hotels, which are increasingly turning to the search giant for their marketing needs

A new report from EyeforTravel and Fornova has some notable findings. In a survey of over 3,000 travel consumers from Australia, Canada, the UK and US, 44% said they always used the tools, 73% did so regularly, and 94% were at least occasional users. The white paper, the first in a three part series of the The State of Hospitality Distribution Report: Metasearch -  is available here.

This puts metasearch at the forefront of the consumer research process and makes it a crucial distribution channel for brands to compete within. “Metasearch offers price comparisons that show consumers where they can get the best deals available and there is demand for this among leisure travelers,” says Ujjwal Suri, Fornova's vice president of distribution solutions.

Indeed, when consumers were asked what made them return to travel brands time and again, metasearch emerged as a winner; 62% of respondents returned to companies that offered the best value, while the second most important category (32%) was digital consumer experience. A closer look also reveals that millennials and business travelers are some of the heaviest metasearch users.

For more on how metasearch is shaping the digital accommodation market, download the free white paper now.

Is Google the dominant player in hotel search?

Unsuprisingly, Google continues to take more of the pie when it comes to hotel metasearch, and continues to grow its hotel fanbase.

Fornova monitors 8,000 hotels across a number of metasearch sites, making regular searches to monitor the space. Fornova's monitoring across Q2 2018 found that when it came to direct ads from hotels on monitored sites, Google scored highest with 80% of searches featuring a direct bid, compared to 43% for HotelsCombined, 30% for Trivago, and just an 8% presence of direct hotel bids on TripAdvisor. It seems that Google has captured substantial market share, and offers a strong value proposition for hotels, as other sites appear dominated by OTA bids.

So, the competition is hotting up, and putting pressure on the results of other metasearch sites. Nir Dupler, CRO for Fornova, expects more hoteliers to turn to Google Hotel Ads as they look to expand their meta presence because “TripAdvisor and Trivago have run into financial difficulties and haven’t been making it work commercially.”

The best performer of the big three appeared to be the metasearch brands of Booking Holdings, which reported in its second quarter earnings call that revenues from meta and OpenTable grew 34% in Q2.

Fornova CEO Dori Stein argues that meta sites struggling to meet financial projections are victims of Google’s advantage as holders of what he called "the most sought-after real estate in the Western world". At the same time, the share prices of TripAdvisor and Trivago "aren’t doing that well and they’re spending more and more on advertising so that they can reach more consumers”. He continues: “But it’s coming at tremendous costs, while Google is increasing the number of consumers exposed to their metasearch engine with no real additional costs. No one said it’s a fair world.”

Google is not sitting on its laurels either. After upping its game earlier this year by improving its mobile hotel search experience with enhanced booking capabilities, price filtering, amenity details and automated comparisons, the search giant recently improved its hotel ads platform. In July, Google announced that later this year, hotel ads will become part of the Google Ads platform with a new campaign type. This shift will allow management of hotel campaigns within a single platform, and will run alongside advertisements of other Google campaigns. At the same time, a new 'hotel center' aims to simplify the management of hotel price feeds. In addition, Google appears to be experimenting with putting Hotel Ads above its usual top-listed paid ads in mid-2018.

Clearly, other meta players need to be aware that the Google juggernaut is making significant inroads. The will need to fight hard in this corner to capture critical hotel marketing spend and become less reliant on other online travel agents.

For more on how metasearch is shaping the digital accommodation market, download the free white paper now.

Hotels and OTAs are being undercut on the overwhelming majority of OTA searches by non-authorised players looking to capitalise on price competitiveness, the white paper finds. 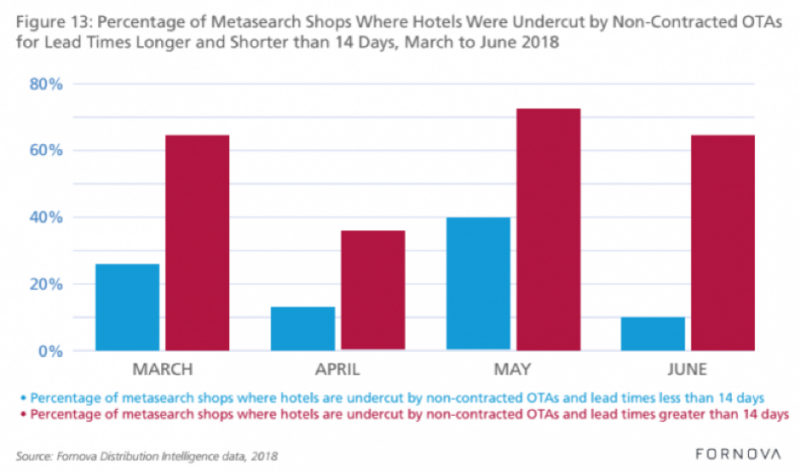 In fact, the research from EyeforTravel and Fornova finds that one of the biggest issues facing rate integrity are the practices of some contracted wholesalers, which are selling inventory to OTAs that do not have direct agreements with hotels. The result is lost market share and revenue for both hotels and partner OTAs, Fornova found after monitoring nearly 10 million shops made through metasearch engines in 2018.

This white paper, produced in collaboration with Fornova, gives real-world data on hotel, wholesaler and OTA bidding strategies, alongside consumer behaviour, and meta success metrics. Use these to understand the channel, the competitive landscape and build a winning strategy!

Also in the report: