The great railway debate: why data is at the crux of every journey

Pan-European train travel is romantic and fun but it's hard to book and often dearer than flying. Is Loco2 the solution, asks Pamela Whitby

Kate Andrews and her brother Jamie grew up with environmentalist parents. “They decided when we were teenagers that we would never fly anywhere on holiday,” says Kate. While at the time this was somewhat annoying, it clearly made a huge impression on the two siblings, who co-founded Loco2, a new online rail travel agent. In fact, the two have based their careers around making it easier not to fly.

“If you want to get from London to anywhere, the first 100 search results that come in from Google are for flights. That’s very frustrating,” says Kate. 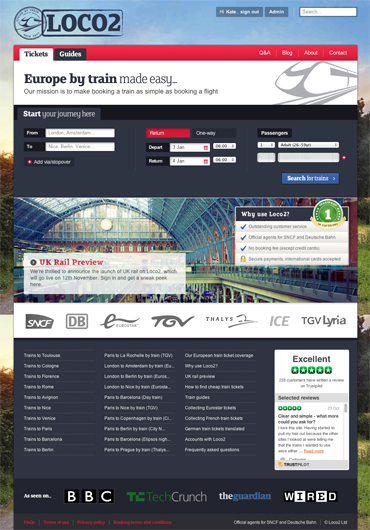 The initial ‘big idea’ was to start a global, multimodal company that could bypass the need to fly anywhere in the world. So in 2006, after finishing university, Kate attempted to circumnavigate the globe without flying. With a trip to Costa Rica on a cargo ship with 40 Russian sailors, a job on a yacht that involved crossing the Pacific and the trans-Mongolian from Ulaanbaatar to Paris and then EuroStar back to the UK, she almost succeeded. However, she did have to fly from Australia to Singapore.

That initial goal has been narrowed a bit and Loco2 (a play on Low CO2) will add UK Rail to its arm on November 12; it already live with French and German rail. The goal is to add more operators in order to make pan-European rail travel much simpler and more competitive. “If people can see the fares of different operators in Europe right next to each other, then they can make a much better decision,” explains Kate.

Everything revolves around data

The company received its first round of funding in 2011 and used at least part of that to hire Jon Leighton, who heads up their technical team. “We realised that we needed to make something very complicated and technical, very simple,” says Kate. Loco2’s aim is pretty simple – to enable Europeans to enter any destination – no matter how small or insignificant – and to be presented with several options from a wide range of rail operators. They want people to be able to find the right tickets, at the right price without ever having to leave the website of Loco2. “It has to be seamless and integrated,” stresses Kate, because to book pan-European rail travel today implies some kind of prior knowledge of the various operators in different places. It also means going to different websites. If you want to go from London to Barcelona, you need to cross three countries, which makes it difficult to know where or how to book if you don't have prior knowledge.

While making rail travel simpler is the goal, it’s anything but straightforward – and the firm has faced some “pretty substantial challenges”.  The big problem, says Kate, is access to timetable data from the multiple rail operators across Europe. Only companies that operate trains can access data and as a private company with no trains Loco2 doesn’t qualify.

So today, while it is possible for consumers to access the data from multiple airlines through one easy-to-use interface, the same is not true for trains. However, this is changing as a result of the ‘open data movement’, which is calling for timetables to be made open to software engineers so that they can radically improve the customer rail booking experience. On top of that there have been legislative moves afoot in Europe – such as the 2007 Third Railway Package - which includes provisions to uphold passenger rights around access to price and timetable information. There has been progress and a clear recognition of the need to standardise data across different rail providers. “Ten years ago it wouldn’t have been possible to have an API connection to SCNF or Deutsche Bahn,” says Kate.

However, as with everything in Europe, things move very slowly. While this is frustrating for Loco2, Kate argues that because the company is small it is able to move quickly to integrate the systems of rail operators into its own platform. And this it has done so far with SCNF, the French operator via its UK counterpart, Rail Europe. Deutsche Bahn too has recently come on board and other integrations are in the pipeline. Loco2 says it is the is the first and only place where it is possible to combine the fares of UK, French and German trains, including high-speed services such as Eurostar, TGV and ICE.

Kate is quick to stress, however, that their service will be completely impartial with a best price guarantee. So if there is a cross-border service between France and Germany operated by two different local operators, then Loco2 will simply present the customer with that choice – and take a commission from the operator that wins the customer.

Loco2 is still a work in progress. “We need to add more rail operators’ systems into ours while maintaining the same degree of usability so that we can operate a comprehensive service. Testing has been rigorous. “Our software development process is agile [they use tools like Pivotal Tracker] and we can iterate things quite quickly,” explains Kate, adding that they spec the minimum viable product for integrating a rail operator and then work towards doing so as soon as possible with the aim of failing fast, but then taking those learnings and improving the product accordingly. By "failing fast", Kate is referring to a term coined by Eric Ries, a serial entrepreneur and author of the Lean Startup. In his book Ries encourages companies not to invest huge sums on something that won't work, but rather to be nimble, learn quickly from feedback and move on to improve something as soon as possible. At Loco2 user testing is done mainly in house and happens swiftly, yet thoroughly, with changes made to address common frustrations. The firm has also conducted conventional user testing and has found that the “beauty of social media” allows them to ask various to groups to try out various features and give feedback.

The ultimate goal is to make it easy to travel by train in Europe. That is a noble goal and one that will not only solve a consumer problem, but could help the environment too. The company goes live with its UK service on 12 November, and is working hard to integrate other operators. So watch this space.

Do you have a view on the ‘open data movement’? If so please get in touch with pamela@eyefortravel.com.