A French-based tech start up believes that semantic search is the future of the modern web. Pamela Whitby chatted to the company’s founder at TDS Europe last week

Sépage – the winner of last week’s EyeforTravel Innovation in Travel Awards - was recently invited by Google to present its innovative technology to 40 of the search giant’s biggest travel clients in Paris.

Milan Stankovic, chief executive and co-founder of the French start up, says it took a while for the reality of this invite to sink in but he believes Google’s nod of approval was a clear sign of the search giant’s trust in their innovative product. It was also an acknowledgment, at last, of the importance of semantic search to the modern web.

“This year’s innovation awards were a real eye opener,” says Tim Gunstone, EyeforTravel’s MD. “Companies like Epteca, minube and Touriocity proved they are matching huge dreams and plans with real traffic and profitability. And for the final winner - Sépage- to be a semantic search player, beating the hands down moneymaker that is Revinate is truly of fascinating.”

For the final winner - Sépage- to be a semantic search player, beating the hands down moneymaker that is Revinate is truly of fascinating

After winning a similar innovation award in France last year, Sépage secured its first client - a French online travel agent Nomade Adventure. “This really kick started us as we were given the opportunity to test a number of different scenarios using the technology,” says Stankovic.

Semantic web technology has been slower to gain a foothold than expected - even Google, some would argue, were late starters. But Stankovic, who has a quietly confident twinkle in his eye, has long believed that it is not simply an academic technology but one that will have real application in industry, and on the user experience. During the course of his PhD, he settled on the travel industry because it is a “domain where end users today really suffer”.

When planning a trip, people today typically spend 48 hours looking at different websites before making a final decision. While some of this dreaming and planning may be enjoyable, Stankovic argues that too much time is wasted in the process of comparing different sites to be absolutely certain before making a travel purchase.

Sépage takes a different approach to the classic approach of using big data technologies and machine learning which has been used by the likes of Amazon and Google. Whereas Amazon relies on browsing history and the data of many, Sépage’s technology generates user knowledge at the second click. Rather than being product agnostic, it adds information about a particular place by harnessing rich data from the public web and from social sources from the likes of Wikipedia and Foursquare.

“We use freely available public data and treat it intelligently so there is no need to buy user history, which can be costly,” explains Stankovic. “We are also completely compatible with new user legislation around privacy because the user can remain completely anonymous.”

So, a brand new user arrives on site and searches on Barcelona. Now, anybody who has been to Barcelona will know that this is a city that could be associated with Gaudi, architecture, museums, nightlife or even the beach. The user’s second click is Berlin, also a city with a lot on offer. But, says Stankovic, if you look at the intersection between Barcelona and Berlin, you’ll probably find that the common ground is nightlife. Had the user clicked on Bilbao, then you might find that the intersection is architecture.

From the second click then, the firm has a better idea of what to propose to the user who, according to Stankovic, is 10-15% more likely to remain engaged on the site than going elsewhere to compare. Better still, they are 18% more likely to convert. Keeping users engaged for longer, and ultimately converting them is a holy grail for any travel brand.

Sépage began commercialising the product in September and the firm now has ten clients. With a sales person in London and Paris, and Google helping to raise its profile, the firm is well placed to move quickly in a sizable market; the technology is relevant to all online travel agencies as well as airlines and hotels, providing they have at least 20 properties.

Runner up to Sépage was Revinate. The latter’s inGuest product aims to help hotels connect with guests across the entire travel lifecycle, and drive much-needed new revenues. 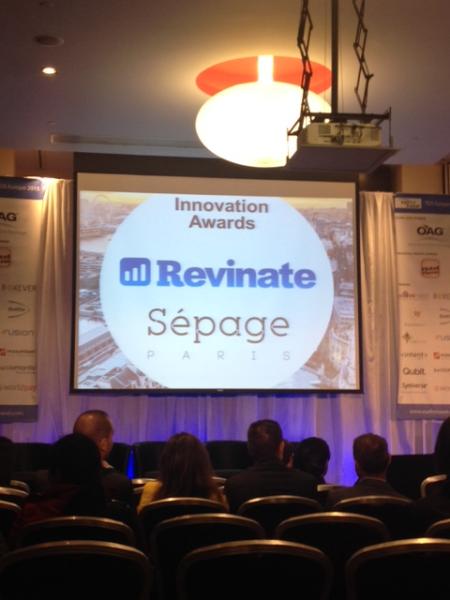 Sépage and Revinate beat off competition from the other ten entrants. Previous finalists of the awards have included HotelTonight, Room77, Kayak and Hipmunk.

Hentschel, a pioneer in the group online travel space with his firm HotelPlanner, said he was proud to chair a session which each year recognised innovation in the industry and gave support to exciting new start-ups.