Travel and the chat bots

With Facebook making headlines this week as it launches ‘Bots on Messenger’ where does the travel industry stand? Pamela Whitby takes a look

‘The chat bots are coming’, headlined the Washington Post in an article this week. Bots, a ‘seemingly nerdy new product’ are ‘the programming trend of the day in Silicon Valley’, wrote the Guardian. In this week of media fanfare after Facebook announced that ‘Bots on Messenger’ are coming, one could be mistaken for thinking they are new.

A quick scan, however, of chatbots.org, a directory featuring over a thousand of the world’s virtual assistants from a range of different industries, proves that this is not the case. In fact, the first ever chat bot, Eliza, was born in 1966 and parodies a therapist to answer questions of patients undergoing Rogerian treatment, a form of person-centred psychotherapy.

Also featured on the site are numerous virtual assistants used by airlines, hotels travel agents tour operators and so on.

In the airlines space, United’s Virtual Expert 'Alex' has been around since 2009. She originated on Continental.com but migrated to United after the merger in 2011. Today she answers 75,000 questions for the world's largest airline with a positive.

More recently, in 2015, TAP Portugal launched Sofia who is programmed to respond to queries about check-in, baggage rules and allowances, special needs services and more. She is now available in Brazil and the UK, after first appearing in Portugal.

For UK-based travel agent On The Beach Allison answers common queries 24/7 and Valerie at Virgin Holidays is said to have a ‘wealth’ of knowledge, and is able to respond to natural language queries like ‘What is it like to visit Dubai' or even ‘What films are showing on my flight?’ 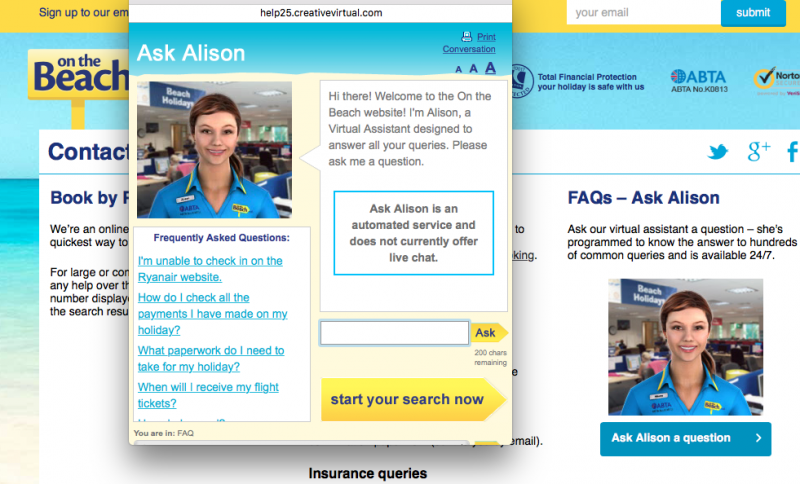 On the hotel front Julia is a Polish virtual assistant for Hotel Chobry and focuses strongly on localisation. And Travelodge has Andrea, which uses the technology specifically to reduce the number of routine inbound customer service queries to the call centre. Travelodge says this saves hugely on customer service costs while also increasing customer satisfaction levels.

This is really what chat bots are being use for today.

“Companies are constantly trying to optimise profits and revenues while at the same time reducing costs. At the same time, customers across every industry, including travel, are looking to find the lowest price,” says Erwin van Lun, CEO and founder of Chatbots.org.  “This is where bots can help”.

Instead of spending months training a human who then leaves for another job, bots can programmed in any language and are there to answer queries 24/7, something that customers increasingly demand.

Not all, however, work so well. This proved by a brief interaction with one of the oldest virtual operators in the travel space, 11-year-old Barbie Bot, a chat bot for the Bella Vita Boat Club, a sort of boating event and party outfit.

To the question: ‘Can I book a boat?’ came this answer ‘No, not now guest!’

‘Reductionism’ was the retort, followed by ‘Guest in order to succeed, you must have a long-term focus’.

Right now, however, most bots answer questions frequently asked on the website, and when that fails they are referred to a human. But, says, van Lun, customer data, advancements in technology and shifts in consumer behaviour means that this is changing rapidly.

“In the long run bots won’t only answer questions they will anticipate them. They will query satisfaction levels, respond emotionally to emotions and take part in video conferencing with customers. In 20 years they will be just like humans,” he says.

Having said that, there is a long way to go and Facebook’s first bots (including those from CNN and the Wall Street Journal) are already experiencing a backlash.

“If bots are the new apps, we’re in for a bombardment of spam that could force you into blocking brands, bots and services, if Facebook’s new chatbots are anything to go by,” writes Samuel Gibbs in The Guardian.

Nevertheless, Facebook’s move is introduce chatbots is a smart one and one that is commercially driven; after all it’s just another way to drive revenues. But will they replace humans in the travel space?

No, says Julien Hevvouët, CEO of iAdvize, a firm that says it brings the human touch to online communications. Messenger bots, he argues, will be hugely valuable for service driven travel brands but they won’t replace humans. It will be more a case of ‘both and’.  Bots will be used to automate a certain number of low value tasks allowing firms “to focus on customers interactions and conversations which have a high value and actually affect their bottom lines” he says.

The recent controversy over Microsoft’s Twitter’s bot, Tay, also revealed how quickly things can go wrong. Within a day of being released in March this year, the robot was posting offensive messages in response to other Twitter users. The reason given was that Microsoft had not given its bot an understanding of inappropriate conduct.

Just as you can’t eliminate offensive people online, this sort of offensive behaviour from chat bots is likely to continue, says van Lun.

In the end it will be about building relationships. Just as consumers choose their friends in their real and online worlds, so too will they choose to engage with the bots the trust.  Facebook has put a lot of backend effort into making its world one that is populated by real people and not automated profiles, he says, and it will do the same for bots.

There may be a way to go, and chat bots are undoubtedly the flavour of the month, but in the hyper-competitive travel industry brands should not forget that the end game must be customer value.