What Celtic creativity, community and crowdsourcing did for tourism

One of Ireland’s little known counties is harnessing the power of social media and community spirit to build up a bank of crowd-sourced content that will help boost tourism and the local economy. In less than a month the tourism body’s ‘Sligo – Who Knew?’ campaign generated 5,000 tweets and over a 1,000 images posted on Instagram. Pamela Whitby finds out more.

In November 2009, when it was abundantly clear that the Celtic Tiger had stopped roaring, a team of advertising and marketing professionals from Ireland’s north-west county of Sligo had seen enough of the doom and gloom. Many local businesses were suffering including those involved in tourism, in spite of the fact that Sligo is just over two hours west of Dublin by train and is home to a wealth of cultural, archaeological, natural and literary treasures. One of the great romantic poets, WB Yeats, penned many of his most famous poems in or about the region where he spent much of his childhood and artists, musicians and filmmakers too have been drawn here. Most recently is the British film director, Ken Loach, who is currently filming his new film, Jimmy’s Hall, in Sligo and neighbouring Leitrim. 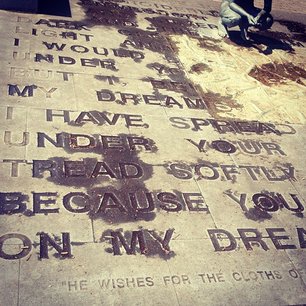 “That November we knew that if we didn’t do something for the economy, there could be another exodus, this time of our own children,” says Paul Keyes, Chief Executive of the Sligo Chamber of Commerce. What happened next is that a working group of professionals who hail from the region got together and launched Team Sligo, a joint public-private sector network with the aim of boosting visitor numbers to the region. The team is funded by contributions raised from businesses in tourism, retail and service with support also from Fáilte Ireland, the official corporate trade tourist body and the LEADER programme, which supports rural development throughout the country.

According to Denise Rushe, social media manager for the Sligo Tourism board, Team Sligo, is “a philosophy more than anything” and is drawing on insights from a team of people passionate about the region. Rushe, for one, moved back to Sligo from Dublin a year ago and has been instrumental in driving the campaign, now into its third year, forward.

So far the marketing drive has focused on boosting domestic tourism. “In the first year we saw a 4% increase in bed nights and in year two we saw uplifts of between 10 and 18% with businesses researched,” says Team Sligo member, Damian Devaney, a marketing consultant formerly with O2 and Diageo (where he managed the Guinness account). This third year, however, has undoubtedly been the most successful.

The interviews with most of the 2,000 executives surveyed for EyeforTravel’s most recent Social Media and Mobile in Travel Distribution Report, 2013 highlighted that social media is central to brand management and reputation management. Another significant finding was that the multichannel consumer can no longer be overlooked and this is something that Team Sligo has recognised.

In fact Devaney argues that the success of this year’s €170,000 multi-platform summer campaign is down to the fact that the team has put digital media at its centre. ‘The ‘Sligo – Who Knew?’ concept coined by the late Johnny Ferguson, a well-known Irish advertising copywriter and screenwriter, harnesses the power of social and the crowd. Sadly Ferguson has not been able to see how the community has got behind the campaign which has really taken off this summer, says Rushe. 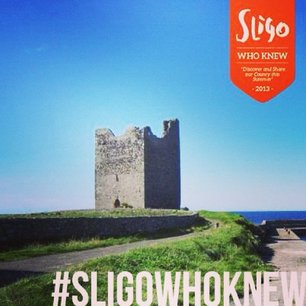 ‘Sligo - Who Knew?’ aims to attract visitors to the county and capitalises on Sligo’s active social media communities and passionate fans, explains Rushe. Local people and businesses are encouraged to share tips, recommendations, current happenings and quirky facts on Sligo using the #SligoWhoKnew hashtag. “We stress to travel brands that they should post interesting facts, images or content rather than, for example, rooms available,” explains Rushe.

As part of this, the Sligo Tourism board is running free social media workshops and challenges to encourage engagement by showing how brands can get involved, and how this delivers benefits to their business. One example of this is the weekly Instagram challenge which is run every Friday giving locals and visitors the chance to tag their pictures with a specific Sligo theme, from beaches to landscapes, adventure and culture and win local prizes such as restaurant vouchers or event tickets.

Images and text updates - mainly uploaded to Twitter, Facebook and Instagram - are then featured on whoknew.sligotourism.ie, a digital board which showcases the hashtagged content. A rich bank of crowd-sourced content is building and in just a month of launching ‘Sligo - Who Knew?’ there were 5,000 Tweets and 1,000 Instagram pics posted. Moreover travel firms are reporting a “substantial increase” in accommodation bookings, says Keyes. “We will have official figures to report in August but the campaign is most definitely having the desired effect.”

Sligo Tourism is using a range of different tools to monitor the success of the campaign including Hootsuite, Socialbro and Social Sprite. Another useful tool, which the body is using, is Tagboard which aggregates content from a cross-section of social networks. 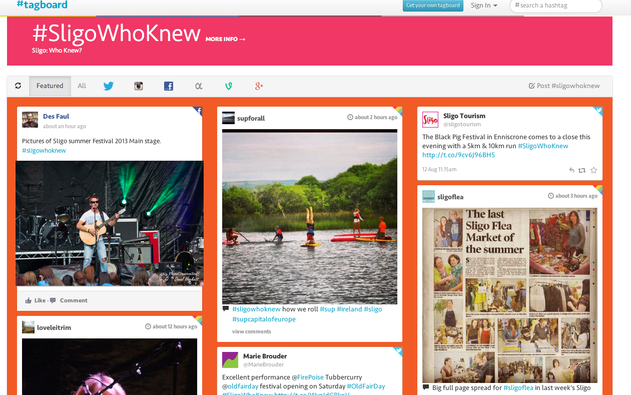 While so far the campaign has focused predominantly on boosting domestic tourism, Team Sligo would like to extend this to international arrivals. At the moment, funding is the issue. But as Devaney points out, Sligo is just over two hours from Dublin, trains run regularly and the region has as much to offer as the south-west of Ireland which is the most visited region after the capital.

Who knows what will happen next.