An innovative marketing campaign in the European city of Amsterdam has shed new light on the power of consumer-to-consumer marketing, writes guest columnist David Hornstein

If you’ve been to Amsterdam lately, you’re likely to have seen the large three-dimensional I amsterdam letters in front of the city’s famous Rijksmuseum. The letters were installed in 2005 as part of the city’s rebranding campaign. By now, the sculpture is the city’s most photographed item, being photographed over 8,000 times on a sunny day. 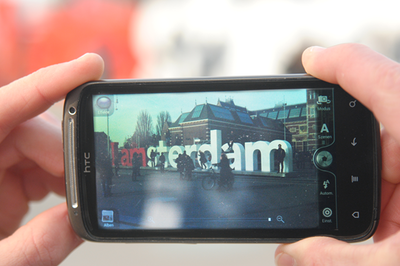 With smartphones and visual social media on the rise, the I Amsterdam letters are an innovative example of how destination marketers can harness the power of C2C marketing.

Visual user-generated content such as tourist photography plays a particularly important role as social media is increasingly based on visuals. DMOs must address this fundamental shift in power and place social sharing at the heart of their campaigns. This means directing all efforts towards turning visitors and residents into brand ambassadors and ‘viral agents’.

Four ways that destination marketers can get visitors talking.

1. Provide attractive visuals that add meaning to people’s personal brand story: DMOs must find ways to get visitors to talk about them in their private social networks. It must be attractive (add value) to people to share destination information with their peers. Essentially, this is about story telling: when travelling, we use photography ‘future memory-making’ but also to create compelling visual stories about our selves. These travel tales are often designed with the purpose of telling our personal brand stories – things we would like everyone else to think about us. Common themes include basic statements such as ‘I had fun’ or ‘I had a unique experience’ etc. Through images on social media we essentially construct our own idealised selves and identities. If DMOs want people to share their destination brand material on social media, they must provide those attractive visuals that add meaning to people’s personal brand story.

2. Find the perfect photo: Every destination needs that one place-indicative photo. Think of the Eiffel Tower or Brandenburger Gate. The reason why these buildings are photographed and shared on social media time and again is because they contain the information of place. These images have ‘PARIS’ or ‘BERLIN’ written all over them and set the stage for the following images and travel narrative. These images are fundamental as they add context to our stories. Your destination doesn’t have an Eiffel Tower? Oh well, I guess a snapshot of an airline ticket will do (but, duh, seriously).

3. Add value to tourists: The I Amsterdam sculpture elegantly captures the information of place in a meaningful way. By being able to touch, climb and photograph the sculpture tourists can literally touch and feel the brand, something that usually is very abstract and intangible. This brings the brand to life and makes it fun to interact with. When 75 Amsterdam visitors were asked why they photographed the sculpture the most common responses were ‘it’s cool/clever/funny’ and “it shows where I’ve been”. The reason why the letters add value to personal brands is not only because they are place-indicative but also because they are intelligent and fun (word play) – attributes which we surely wouldn’t mind having our personal brand associated with, would we?! The more indirectly and elegantly the brand message is incorporated the more likely it will be accepted.

Today, the I amsterdam letters are the city’s most important marketing tool. Given the great success of the initial sculpture, there are now four sets of letters around the city. Two are installed permanently at Museumplein and Schiphol Airport. Two other sets (one big, one small) continuously travel the city and are installed at major events such as the ING marathon or the PICNIC festival. The letters were also used in an Amstel beer commercial, generating additional visibility.

Other destinations are following suit. Given the vast social media success, it should come as no surprise that other destinations are mimicking Amsterdam’s brand sculpture concept. Lyon stands out as the most obvious example: the ‘ONLY LYON’ sculpture was inaugurated in 2010 – five years after the first ‘I amsterdam’ letters. Berlin has made a somewhat similar attempt, installing four over dimensional speech bubbles / frames across the city. However, none of them has reached the level of success the I amsterdam letters have.

But Amsterdam remains the most successful destination brand on social media. Comparing user-generated branded content on Flickr and Instagram, Amsterdam’s campaign has undoubtedly generated the most buzz.

On a final note

What we can take away from these examples is that DMOs are trying to find creative solutions to engage the public into the marketing process. Amsterdam is pioneering in the field and serves as a great example of how it can be done. While other DMOs, like Montréal are experimenting with similar ideas, we might find inspiration in the hotel sector, too. Interesting examples of how visitors can be encouraged to share branded content include Ushuaia Ibiza Beach Hotel (Facebook integration) or Sydney’s 1888 Hotel (the world’s first ‘Instagram Hotel’). Creative and innovative incentives for social media sharing will be something to look forward to in the coming years.

David Hornstein is currently studying for an MSc in tourism management in The Netherlands. He wrote his bachelor’s thesis on the ‘i amsterdam’ letters. Find him on LinkedIn

We send a once-a-week email with the best stories from EyeforTravel. Sign up for our weekly newsletter (sent every Friday)